Marketing BS, or another genre of boots? – probably a bit of both, but Freeride-Touring boots are now officially ‘a thing’… Our resident boot fitting guru, Phil Evans of Backcountry Uk gives us the low down on three of this years most interesting new backcountry ski boots – over to Phil;

“All the major boot manufacturers have been producing ever more powerful touring boots and ever lighter freeride boots over the last few seasons – so it was only a matter of time before a new genre appeared somewhere in the middle; Freeride-Touring Boots, Freetouring boots – whatever – but we finally have 3 new models this season that really do fit the description: Dynafit’s new Hoji Free, Dalbello’s Lupo Air 130 and Scarpa’s Maestrale XT.

All 3 of these boots offer top end freeride performance, coupled with a good walk mode and a very reasonable weight. Below we give a run down on each new boot and who it may be suitable for. 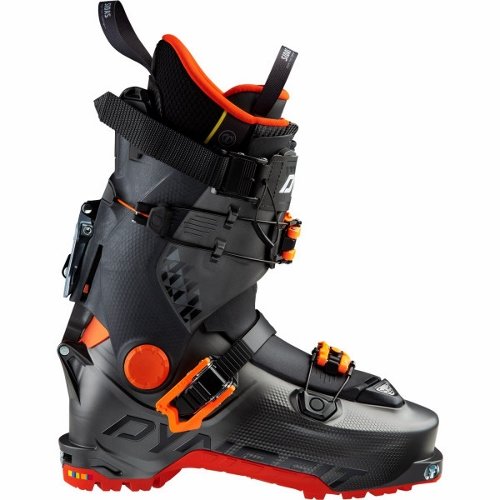 The Dynafit Hoji Free ski boot is the top boot in the Hoji range and the biggest change is the introduction of a ‘proper’ toe lug and beefed up heel lug which now conform to ISO 9523. This means that the Hoji Free can now be skied in many of the popular free touring and Multi Norm Compatible Alpine Bindings such as the Salomon Shift and Marker Kingpin M Werks.

The Hoji Pro Tour boot was well received last year with it’s innovative ski-walk mechanism, which gave a big range of motion when skinning and a super solid lock down when skiing. However, this boot was designed as a true touring boot option, alongside their TLT7 and PDG race boot and the lack of front toe lug caused issues with binding and crampon compatibility.

The new Hoji Free on the other hand, is designed as a freeride boot that you can tour in: it features the same ski-walk mechanism, but adjustments to the shell and liner give an extra notch of ski support now at a 130 flex.

Combined with this, the fit volume has been reduced from the quite roomy 103mm forefoot width of the Hoji Pro Tour down to a nice medium 99mm width, with the toe depth also having been reduced. This makes more sense for a performance boot as most people will be wanting a snug fit in a hard charging backcountry ski boot like this.

The liner has been developed with Sidas, the French footbed and boot fitting gurus and gives excellent heel hold with heat fit fine tuning.

The Hoji Free has been designed to be a one boot solution for those wanting comfortable all day touring functionality and turbo charged downhill performance and it will do both well for all but the ‘fast and light’ ski tourers, who will still want something lighter for the biggest days of ascent. In conclusion, we’re very impressed with these versatile and well thought out boots; the fit, performance and compatibility with the leading bindings on the market will make this one of winter 2020’s hottest products.

Using a new Grilamid plastic technology containing tiny bubbles of gas, the Lupo Air’s are genuinely lightweight at only 1.3Kg per boot.

Designed to give the best ski performance possible and with Backcountry essentials such as a low weight, walk mode, tech fittings and Grip soles, the Lupo Air 130 are a great choice for people wanting touring ease and comfort without compromising the descent.

Dalbello’s low cuff hinge height means that you get a bigger range of motion in walk mode, with a more natural feel. The removable tongue found on the Lupo AX has been removed and replaced with a light waterproof cover – this gives a really impressive range of motion for hiking and skinning.

With a 100mm published last width, the Lupo Air have been designed with a lower fit volume than the Lupo AX; this will suit people with a more medium foot volume and gives better heel and midfoot hold.

Designed to take the ski performance of Scarpa’s very popular Maestrale RS up another notch, the Maestrale XT ski boot has had a few tweaks to take it up to the freeride boot level of ski performance: a new cuff, the addition of a second cuff buckle and a Booster strap style power strap to take the stated flex index to 130+AT.

It’s worth noting however, that the Maestrale XT still has a full rubber sole unit with a rocker on it, for walking and mountaineering performance – so it will not work on conventional ISO 5355 alpine downhill bindings, or Grip Walk Alpine bindings. Ski Touring, MNC and Freetouring bindings are required.

The new cuff on the Scarpa Maestrale XT ski boot is higher and stiffer to beef up ski support. Scarpa have also added a second cuff buckle and a chunky powerstrap with a cam lock to allow you to really crank up the cuff in order to give the closest control, though they have removed the heel retention strap which people like.

The ski / walk mode is more akin to the system from the Freedom SL; solid mechanically, but not as light as the regular Maestrale system. The sole unit has a slightly lower rocker than the other boots in the family, though they are stiff and feature a vibram tread.

The intuition liner is as you would expect: very good quality, they mold well and last well, but they feel firm.

Overall the fit is similar to the Maestrale RS2, but I felt that with the different liner the Maestrale XT were a closer fit around the mid foot and heel, they seemed particularly close fitting around the 5th met base which is a common area for shell stretches in the other Maestrale boots.

There is no doubt that the Maestrale XT will be a popular ski boot for people wanting no compromise ski performance whilst touring, the fit will suit people with a medium to low foot width / volume. An excellent freetouring boot for wide skis and hard chargers!”